“You have come to a dying parish”. This was the remark that I was greeted with when I began visiting in the Parish of Baxenden. “The writing is on the wall” another said. On the night of the Institution I had only just taken off my cassock and surplice when an official came to me and said, “We have got dry rot in the Church”. He immediately took me and pointed out an evil looking fungus high up on the south wall. I well remember, too, how a representative manager said to me the same evening, “We must have a Managers’ Meeting as soon as possible, it is urgent, the School is a disgrace.” So I knew there was a lot to be done. But it wasn’t long before I began to realise that the real trouble was going to be shortage of people. Here we had a Church far too big for the village, and a big out-of-date School (also with dry rot) and so few people to call upon. Indeed, the first P. C. C. I attended spent most of the evening discussing this, with a town councillor present to answer questions. No new property had been built for many years, and it was quite true that Baxenden was “going down the hill”. Nevertheless, the required improvements to the School had to be put in hand, because the education authorities had begun to speak about the possibility of closure (they had been very patient, judging from the reports which had come to me). But finance was the great problem; at that time the Ministry grant was only 50% of the cost, and we nearly found ourselves taken to court over the final settlement, and indeed we would have been if the Diocese had not come to our rescue. I was given ten days to find £2,000 or else . . . . . . .

When I was appointed to Stalmine one of our bishops said to me “You’ll be glad not to have another Church school to worry about”. (There is no Church School at Stalmine. ) The dry rot in the Church was eventually eradicated, but it was much more extensive than it appeared on the surface, and if I remember correctly cost over £500. The Church had to be closed for a long period, and Services held in the School

It was lovely to live in a brand new house with central heating for the winter, and such a magnificent view over the valley to Friar Hill. But we had some problems at first. For several weeks we had to live without any interior doors. They had shrunk (due to the central heating, the builders said) and had all to be taken away and made larger. I don’t suppose there are many gardens that take fire, but ours did. Before the glebe was sold the long grass used to dry up in the summer and catch fire, and the Accrington Fire Brigade would come and put it out. It is interesting to note that when first we came to Baxenden, and for several years afterwards, we couldn’t get anyone to buy the glebe, nobody was interested. We wanted to sell it to pay off the debt on the new Vicarage

A pleasing feature of the landscape in our day were the steam engines across the valley puffing and chugging their way uphill to Haslingden and Bury. Sometimes they would stop opposite the Vicarage to get up steam. A very sad thing happened one Saturday afternoon. We saw all kinds of things, oil drums, wood, large boxes, etc. floating on water just below the railway lines. There had been torrential rain, the mill lodge had overflowed carrying with it everything in its path. The houses in Mill Street were flooded; it was a heartbreaking sight, especially the shop at the end, money and groceries floating along Many kind helpers came, but it took a long time to get the poor people fixed up again. The same thing happened again on another occasion, and the houses were finally demolished

The agendas for our P. C. C. meetings were chiefly concerned with material needs, which often made me sad because my opening remarks were forced to be “We need money urgently” and the answer on one occasion was, I well remember, “We’ll have a bazaar to start with”. Three Mothers’ Union members went to warehouses in Manchester to provide goods for a drapery stall. Wholesalers in Accrington were visited, and the Schoolroom was a pleasing sight on the great day, and no shortage of willing hands. The result was an awful disappointment, but we learnt a lesson. “If you want anything done well do it yourself”. So each year following we worked and begged and used the talents God had given us to fill the stalls, and at the end of the day our hearts were truly happy, because the proceeds were a personal offering for the Lord’s work 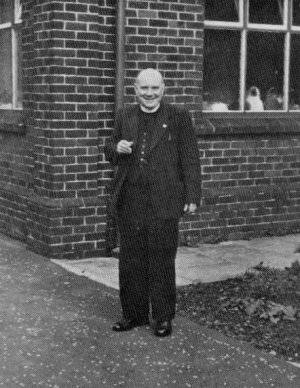 We always felt proud of our Mothers’ Union; the members co-operated faithfully in every project the committee organised, and there was always a friendly and warm atmosphere. Many guest speakers remarked on the happy evenings they had enjoyed so much. During the summer months some of them enjoyed walking through fields and lanes close by, and sometimes going to Festivals. A day we shan’t forget was when we were the hosts to Mothers’ Union members from Wrightington, Great Harwood, and other parishes. After a lovely Service in Church there was a splendid tea and then a concert, which ended with a religious play, “The Other Inn”. Those taking part were so sincere and wonderful that there was many a tear shed and praise expressed for a long time. It was sure to be a success because the lady taking the leading part was alone on her knees in prayer before the play began

For a few years we had a Ladies’ Bible Class in Church on a Sunday afternoon. We had quite a good attendance in Sunday School, and felt there was a need for a class for young women who could not get to the Church Services, but it didn’t work out. Nevertheless, it was well worth the try

I always enjoyed going into the Day School. The Headmaster and his staff were always pleasing to meet, and there was always much interesting work going on and a very happy atmosphere. But I remember on one occasion being urgently summonsed to the School to find not the usual smiling faces, but shivering children huddled together to keep warm. The reason was an insufficiency of radiators for the bitter weather we were having. The Education Office couldn’t help us, so we had to call on parishioners and ask for the loan of several electric fires. Later additional hot water pipes were installed. On another occasion I was called to the School to find the chimney had collapsed, damaging the roof and making it necessary to rope off a large area of the playground. Until major repairs had been done, buckets had to be placed in classrooms to catch the rain on wet days. On Mothering Sunday each year the children were trained most efficiently to partake in the Family Service with music and song. We were always sure of a grand congregation that day. Again, on Day and Sunday School Anniversaries the children helped to make the Services very enjoyable 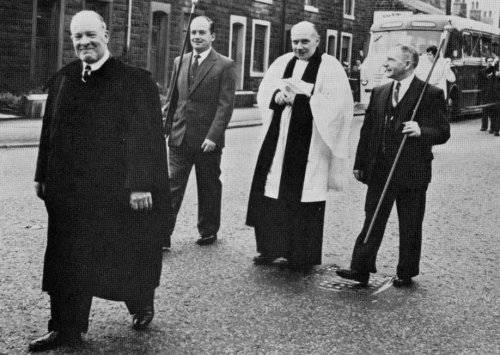 During my forty years in the ministry I have had the pleasure of conducting Harvest Festivals and seen Churches beautifully decorated. Alas, I fear, it is a fading custom for several reasons. However, there was one occasion we shall always remember. Baxenden Church has a lot of space for decoration, and requires much around the Font. So the senior girls and boys in Sunday School coloured pictures and texts to give a Harvest message as people entered and left the Church. We always included a piece of coal and a glass of water, but that year the loveliest piece of coal that ever was seen arrived; it weighed over one hundredweight, and there was no difficulty in finding the right place for it – by the pulpit at the bottom of the Chancel steps. It was decorated with heather and fern, on top a loaf of bread and a jug of water. We had remarked that a bit more green foliage would improve the Font, but alas there wasn’t a leaf or a flower left. Then a kind gentleman came with a bag full of freshly gathered parsley from his garden. In no time there was a transformation; from then that little plant has often been used for Church decoration. A new discovery was made. The coal produced a good sum of money afterwards for Church funds, and the children found a way to give their own message of God’s goodness all the year round

We came to Baxenden after eleven years in a country parish where we had, with God’s help, achieved some of our ambitions and been very happy. A new challenge presented itself, and I think it was a time of testing our faith. Now we look back and thank God for every remembrance of the faithful few who worked and prayed with us to keep the House of the Lord standing as a great witness to God’s unfailing help in these troubled times.”