“I was Instituted and Inducted to the Church on Saturday, October 4th 1947, by the Rt.. Rev. E. Priestley Swain, Bishop of Burnley, the Rural Dean of Accrington, Rev. Glynn Jackson

At that time the Churchwardens were Mr. H. Kelly and Mr. A. Heap. Baxenden was then a village with very little property being built. The fine Vicarage was surrounded with fields

We had a very flourishing Mothers’ Union which met twice a month, my wife being the Enrolling Member. They were a happy band, and raised a good deal of money for the Church. After the holidays each year their first meeting was at a re-dedication Service in Church at 7. 30 pm 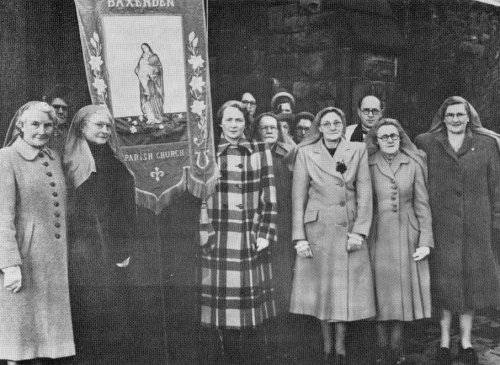 Each year was held the Walking Day when the Choir, Sunday School and congregation walked the length of the village, many times having difficulty with the banner in high winds

Harvest was a fine occasion, with the Church beautifully decorated. Mr. Cowling always made a fine show of flowers etc. at the Font

Only once were the Services cancelled when one Sunday in winter I arrived for the 8 am. Service and found the Church approaches and doors and gates piled high in very deep snow drifts. On occasion in winter the pub near the Vicarage and all the lanes were completely buried in snow

There was also a Mens’ Society started in 1949. Speakers came, and also we had several Coach trips to interesting places

In 1951 I took two of our young people, Constance Hindle and Marjorie Haworth, together with others from the Diocese, to a schloss at Bilstein in Germany. The Northern Daily Telegraph printed an article I wrote about this trip, with photographs. It was a splendid experience for the young people

During my Incumbency our Dramatic Society did some excellent plays. We had to work hard putting up the stage in the School, and dismantling it for Day School. Over the years we did many plays, including “Daddy Long Legs”, “Artificial Silk”, “Such Things Happen”, “Rebecca”, “Pygmalion” etc. The last play before I left was “Two Dozen Red Roses”. Older people will remember some of the players – Derek Hutchinson, Ruth Whittaker, Sam and Joyce Salt, Alice Wilkinson, Albert Walmsley, Edna Gaskell, Jean Dawson, Joe Cowling, Jack Ingham, Maud Ratcliffe, etc. Another popular feature was the “At Homes” just after Christmas. Many young and old took part on various nights. I wrote and produced a play “They Came by Night” for one of these, and the Senior Sunday School girls did a fine job, causing much laughter at times as the play progressed. Albert Walmsley was the poor smuggler, and bore up well amid the mass of femininity!

For a time also we had what were called “Cafe Continental” evenings of cabaret and dancing. We used to enjoy thoroughly the times when we went carol singing in the Parish at Christmas, arriving home very late in the morning after touring the village. Hot drinks, cakes, at houses, a friendly welcome made them memorable

I used to go to the School each week to take the Scripture lesson. Mr. Owen was the Headmaster, to be followed by Mr. J. Walker, who later became Churchwarden. Miss C. M. Burton was Headmistress, assisted by Mrs. H. Wild and Mrs. M. A. Veevers. As Chairman of the School Managers I remember we once issued an appeal for £200 to repair the School roof and ceiling. That was in 1950

The Church had an annual Gift Day, and this was the occasion when the Mothers’ Union gave a handsome donation from their funds. I also began the Free Will Offering scheme, with weekly envelopes

A Year Book was issued in 1953 giving information on the Church, and details of its Founding. There may still be copies in the Parish