The Reverend William Walker was the son-in-law of Canon Downham, and took over when he retired in 1916. He and his wife invited both Canon and Mrs. Downham to share their old home with them. The invitation was accepted, and they remained there until their deaths. In 1916 the Great War was raging, and nothing could be done in the way of repairs except what was absolutely necessary. However, when the war came to an end in November 1918, the following year repairs to the parochial buildings were taken in hand, and during 1919-20 there was spent on the vicarage and Glebe Buildings £400. The congregation and friends contributed £230; the balance was paid by Reverend Walker

A Jubilee Bazaar in November 1926 was arranged in order to raise a further £1,000 needed to carry out repairs to the Church and school. This was a three day event, held in the Baxenden school. It was hoped that by the Jubilee of June 13th 1927 the parish would be out of debt

The Reverend Walker also erected a Cenotaph in the churchyard. This was to commemorate the memory of the 36 men of the parish who were either killed or died from wounds in the Great War. The cost of £450 was met by public subscription. The monument was unveiled by Sir George Bullough, Bart. , and dedicated by Canon Downham on November 13th 1920 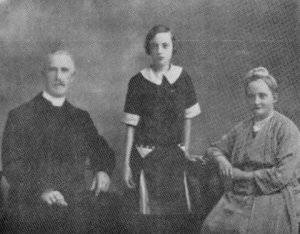